Have you ever walked into a store and seen that one item that you can’t take your off of? You glance at the price, and quickly walk over to another display in hopes of avoiding it at all costs…but then you find yourself wandering back (against your own will) just to get a second look. Next thing you know, you’re smitten…long story short: I bought a new grill this past weekend for Memorial Day. I originally set out to buy one of those small charcoal models, but walked out of the store with a massive gas grill and a grin the size of Texas. My summer cooking has just been taken to a whole new level of potential. I christened the grill this past weekend with quite the spread, and so for this post I thought I’d share one of the evening’s masterpieces: Grilled Drumsticks with Peach Barbecue Sauce.

This sauce literally lives up to the name “finger-lickin’ good!” Once the chicken ran out, people became creative and turned it into a chip dip…or just ate with spoons. What’s great about this recipe is that it can be made any time of year, especially given the use of preserves (in lieu of fresh fruit). While peach is what’s called for in the recipe, I’d love to try it with blackberry, or even rhubarb. Add some bacon and maple syrup and smoked paprika…now that’s barbecue! I made the sauce a day ahead of time, which I highly recommend – this will give all those beautiful flavors enough time to really get to know each other, making for a fantastic sauce!

Did I mention that I made 5 POUNDS of chicken legs for this party? These take a long time to cook, so it may not have been the best game plan for a large party (lesson learned!) That being said, the meat was perfectly tender thanks to a quick and easy brine. Topped with that beautiful sauce, these were devoured in no time! My good friend Bonnie snapped several classic shots of friends – they were just too good to not include in this post 🙂 Click HERE to see the recipe for perfectly grilled barbecue chicken! 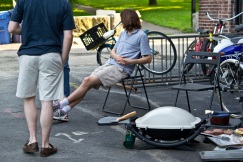 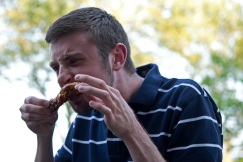 Irresistible: I couldn’t stop thinking of how irresistible this sauce was, and how I (personally) could not resist that beautiful new grill…Franz Liszt, while being seen as a true virtuouso, had the ability to bring an audience to near hysteria during his performances, causing women to faint, weep, and fight over his discarded kerchiefs and even cigar stubs! This magnetic quality helped coin the term “Lisztomania” – musicologist Alan Walker shares more on this phenomenon:

Liszt was a natural phenomenon, and people were swayed by him…. With his mesmeric personality and long mane of flowing hair, he created a striking stage presence. And there were many witnesses to testify that his playing did indeed raise the mood of an audience to a level of mystical ecstasy.

I chose Liszt’s Piano Sonata in B minor for the pairing. It’s wealth of components, emotional depth, and thematic metamorphosis perfectly speak to the richness of these drumsticks – a dish that relies on ingredients, flavor, and time. This piece comes across as a single movement, though many agree it can be applied to the sonata form (with no formal breaks, naturally). This seamless quality makes every component dependent on one another; an irresistible “blend,” if you will 😉 The work ends on a peaceful coda, quite similar to our food “coma” following this massive feast. While this sonata wasn’t among the works that induced mass “hysteria,” its present-day popularity has certainly placed it within the upper echelon of our modern “Lisztomania.” Enjoy!