Derby Day Celebrations are perhaps some of most ironic of all sporting affairs. In Kentucky there is a two-week long festival celebrating the race, which is all of 90 seconds. That’s right – the Kentucky Derby lasts no more than 2 minutes, yet is the state’s most prominent annual event. Nonetheless, one can’t help but be enchanted with Derby enthusiasm and its beloved traditions: mint juleps, ridiculous attire (especially hats), endless parades, garlands of roses, and every pie imaginable.* My friend Beth McDonald (having completed her Bachelor’s at the University of Kentucky) is a genuine Derby enthusiast. She hosted her second annual Derby Day Party this past weekend, and enlisted my pie expertise. So I arrived at the party donning an enormous hat with the following two pies: Kentucky Bourbon-Walnut Pie with Chocolate Ganache and Peanut Butter Silk Pie with Pretzel Crust. 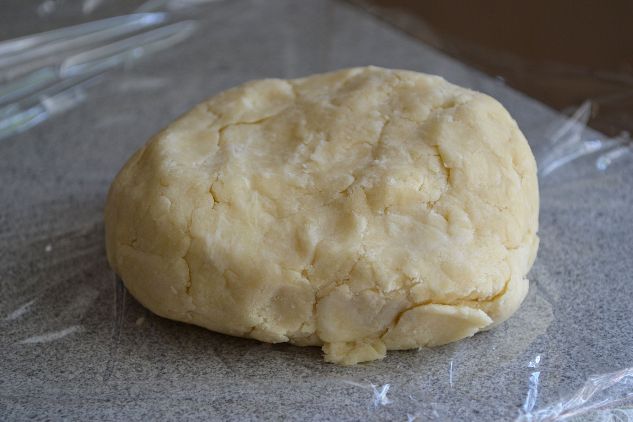 I have never been, and never intend to be, one who relies on a box – “from scratch” shall forever be my baking mantra. Pillsbury frozen pie crusts make it seem so simple to, when, in fact, pie crusts are an inherent art form to a number of culinary traditions. The creation of the perfect pie crust takes place over the course of two to three days, ideally. This includes chilling, resting, and baking. I always cube my butter and freeze it the night before I make pie dough (tip from SimplyRecipes). I then wake up early enough the next day to make the dough, and allow it to rest in the refrigerator for at least 6 hours. Patience is what makes the perfect pie crust – so if you are craving a pie last-minute, then and only then is Pillsbury your best friend. 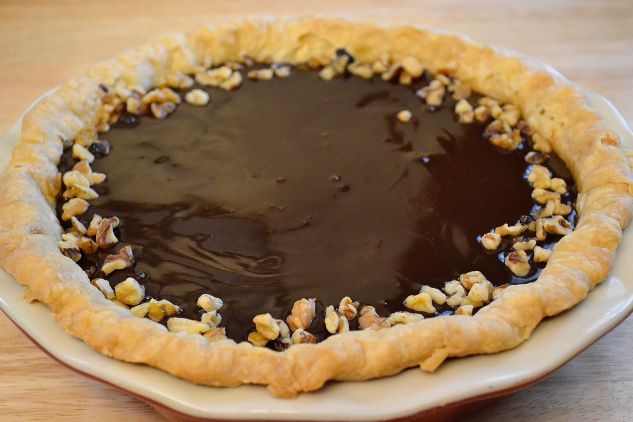 No Derby is complete without a “Derby Pie”. A Kentucky tradition dating back to 1950, the original Derby Pie was a chocolate-walnut tart created by Walter and Leaudra Kern, owners of the Melrose Inn. A popular addition to this pie is a quarter cup of Kentucky Bourbon, as well as substituting pecans for the walnuts. I opted for the traditional walnuts, but added some of Kentucky’s finest: Woodford Reserve. The title “Derby Pie” is  a trademark strongly defended by the Kerns’ Kitchen, so any publication of the recipe, from this blog to the Bon Appétit cooking magazine, must use an alternate title.** For some reason the top of my pie was less seemly than normal (half the walnuts migrated over to one side of the pie, and the chocolate was more prominent on the other), so I covered mine in a silky layer of ganache. And besides, who doesn’t love melted chocolate? Check out my version of this classic by clicking HERE. 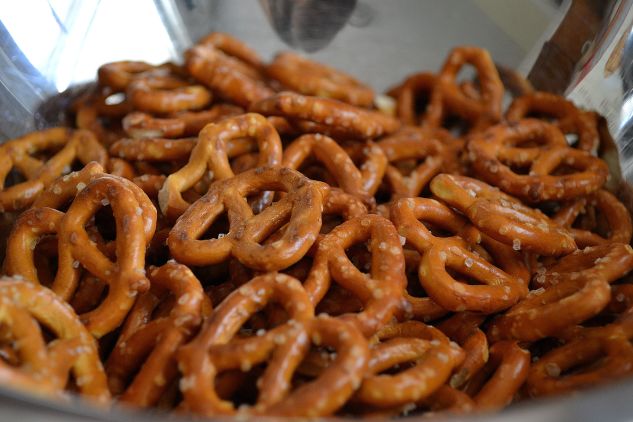 If there is such a thing as a pretzel addiction, then I am guilty as charged. I LOVE pretzels (as all my friends know). The duplicity of this pie is what makes it truly remarkable: sweet and salty, silky and crunchy, peanut and pretzel. This pretzel addict was sold.

This recipe was a combination of two recipes. It makes a very soft pie (fair warning) but with a fantastic flavor! That being said, keep this pie chilled until ready to serve.  Both the filling and crust are fairly simple (compared to the previous pie in this post), and can be made either the day of or the night before. For the sake of convenience, I almost always try to make things the day before, if possible. I made this pie with crunch peanut butter, to add some more texture to the filling. Click HERE to learn how to make this sweet and salty delight.

The musical pairing for these pies was a no-brainer: William Tell Overture. For those of you who are unfamiliar with this, think of every TV Show/cartoon with racing horses…remember that theme? Yes, this is a cliché choice for Derby Day pies, but the selection is far too fitting to ignore. This overture is (in actuality) the opening to Gioachino Rossini’s Guillame Tell – an opera that tells the story of the Swiss legend and hero William Tell. Yet the popular radio/television series The Lone Rangerhas forever displaced the context of this overture for millions of Americans. The overture is divided into four continuous sections. The known and loved excerpt comes from the Finale – the “cavalry charge” (contextually part of the battle scene in Guillame Tell) that served as the opening sequence for the classic television series.*** The video I have included here include the final two sections: the Ranz des Vaches, or “Call to the Cows”, and the Finale. The Ranz des Vaches has a pastorale quality, and features the English Horn; this section is yet another highly recognized theme. The recording features conductor Herbert von Karajan and the Berlin Philharmonic – I highly recommend taking the time to listen to the video “Part 1” as well to get a sense for the whole piece. Enjoy!