Enjoying a cold glass of milk with a slice of cake is a beautiful thing. Given that success, who’s to say combining the two can’t be just as beautiful? I don’t mean just simply cooking a cake with a cup of milk in the batter – I mean literally drenching it in milk. Heck, why not make it THREE types of milk, just for added measure…this is precisely the method used for the beloved cake Tres Leches Cake. When I bake for a large crowd, I try to make a cake that brings the biggest “bang for the buck” – this cake was a HUGE hit: Dulce de Leche Cake with Fresh Strawberries.

The history of Tres Leches Cake relies on two of its primary ingredients: sweetened condensed milk and evaporated milk, both of which are “canned milks.” Due to spoilage and preservation difficulties, excessive health risks made fresh cow’s milk a limited commodity prior to the 20th century. Inventor Gail Borden was the first to develop the concept of canning milk. Heating the product was the primary solution to eradicating harmful bacterias, allowing for milk to be stored and distributed without refrigeration.* The dispute over the demographic history of this cake, though, is both a cultural and corporate issue. Nestlé claims a big role, having advertised the recipe on the backs of canned milks to promote the products, while Central American nations claim rights to its conception. There is little evidence on the actual origin, making the dispute a futile one.** 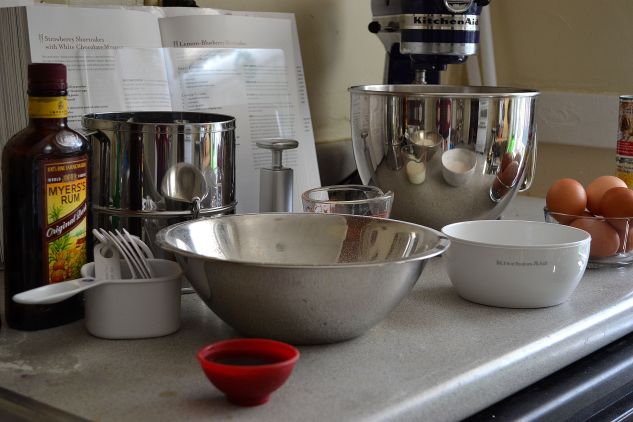 This cake is much easier to make than it seems, even though there are a lot ingredients (see above) – it is essentially a vanilla cake that is subsequently soaked in three types of milk (see photo below). The result is a beautifully moist cake with a lighter taste than expected. The recipe I used, originally from Saveur, is called Dulce de Leche Cake given the layer of dulce de leche spread over the top; the “traditional” tres leches cake simply uses whipped cream as a topping. I took it one step further and halved strawberries to add a decorative flair. All-in-all, it was a delectable work of art. View this recipe by clicking HERE.

Wanting to focus on the diversity of ingredients used in this cake, I went with a piece that has a number of musical “ingredients”: Charles Ives’ Three Places in New England (as per the recommendation of my dear friend Neal Markowski). This work was composed over a span of nearly three decades, and stands as one of Ives’ most iconic pieces. Considered to be one the first American composers to reach international acclaim, Ives’ works went largely unrecognized for the majority of his lifetime (having led an extremely successful career as a life insurance executive). While the literal interpretation of “three” and “tres” can be considered, my pairing takes into regard the numerous styles and layers Ives incorporates into this work. Ives is best known for his adaptation of traditional hymns and popular American songs, such as Yankee Doodle, into his compositions. These themes provide relatable substance within contexts of heavy chromaticism, polytonality, and layered melodic passages.^ Three Places is considered to be highly representative of Ive’s style, incorporating both his “avant garde” techniques as well as a number of (paraphrased) traditional themes. This work consists of three movements, each representing a different location in New England:

The link I’ve included below is of the first movement (slightly biased considering I’m a Boston gal), and is performed by Orchestra New England (quite fitting) with James Sinclair conducting. For those unfamiliar with Ives, he’s certainly no Beethoven; yet his works have an endearing, rich quality which is truly masterful, and stand as important emblems for our culture. Enjoy!