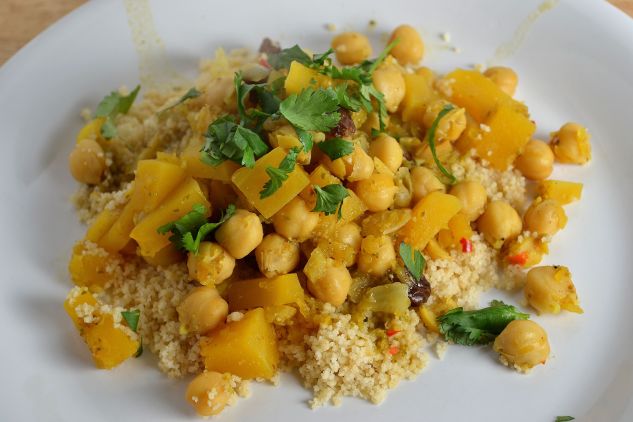 I have a theory when it comes to cooking vegan: make it count. Vegan fare should fully outshine the fact that it is without meat, so I take explore a number of ways to do this: flavor, aesthetic, novelty, heartiness, etc. I’ve mentioned my neighbors who are vegetarian by choice, and I love having the chance to cook wholesome dinners with them. But my self-challenge in vegan cooking is to hook the non-veggies who swear by bacon, and this Moroccan Butternut Squash and Chickpea Tagine did just the trick.

You may feel overwhelmed by the ingredients and step involved in this stew, but it’s a lot easier than it looks. The harissa, which you can buy from a store, is extremely simple to make and really gives this dish that extra umph! The other cool ingredient in this dish is the preserved lemon – that may sound a little eery, but it did give this stew a fantastic edge. I’ve included a quicker version for preparing these in the recipe itself.  Canned chickpeas are also always an option, but there really is a special added value to taking the time to cook dried chickpeas. They take a while to soak (overnight), so put that into your prep work if planning on using dried.

Seeing as how I nearly tripled the original recipe, this made a LOT of food. I wanted to accommodate a sizable dinner party (9 people), and ended up with delicious leftovers for a few days after. I served this dish with a whole wheat couscous, but I imagine it would be equally delicious served with pita bread or over rice. Click HERE to make this vegan showstopper today! 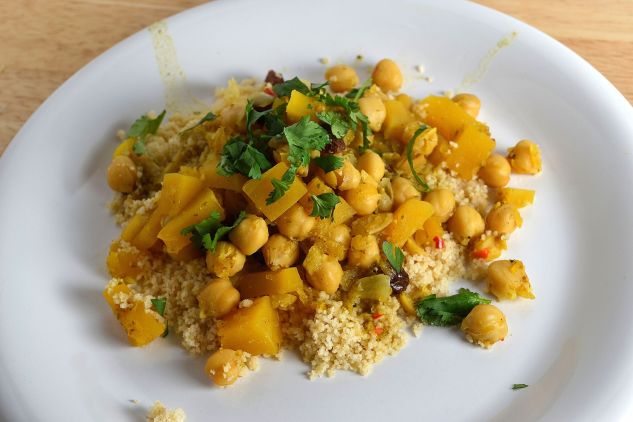 For the musical pairing, I wanted to reflect on the complexity of flavors and components. That brought me to a work I had seen performed live a few years back: Tchaikovsky’s String Sextet in D minor “Souvenir de Florence”. The four movements are quite diverse in quality: the first movement, in D minor, opens the piece on an impassioned, almost violent note. The second movement settles into the relative F major, bringing the timbre back to a calmer state. The latter two movements assume a Russian feel, with a third movement that’s almost playful transitioning into a driven, frantic fourth. This divergence of style made it the perfect match for the complexity of this dish – included is the actual performance of the work I experienced by Boston’s very own A Far Cry ensemble (arranged for chamber orchestra). I’ve included the fourth movement below – enjoy!