I have been enjoying a LOT of South Asian cuisine as of late. My boyfriend Tom has converted me into a curry-loving/spice-craving gal…granted, he’s got some great recipes up his sleeve (hence the series). In fact, it’s a cuisine that’s perfect for this time of year – winter is not my forte, and Wednesday’s temp was a balmy 7 degrees. The promise of a piping hot meal loaded with spices and protein has been a saving grace during the season. Piling on layers of clothing can do the trick, but this Saag Tofu and Chicken Tikka Masala works wonders on a chilly winter day.

Both of these dishes are common to the Punjabi region, where Tom spent close to two months exploring (North India primarily) – the photo above was taken in a village called Auli. Located in northeast Uttarakhand, Auli is about 13,000 feet above sea level and lies deep within the majestic Himalayas. The Himalayas,  which is Sanskrit for “abode of the snow”, make this a perfect anecdote for winter:

“After a ten hour ride in a van hugging cliff sides all the way up into the mountains we arrived at Joshimath, before another hour straight up a mountain toward Auli. The driver could only make it so far and we had to hike the last couple of miles in deep snow to the village, which resides quietly in the shadow of Nanda Devi, India’s second highest peak at 26,000 feet, just a hair shy of Everest. From the plateau, a heady panorama of mountain peaks and micro-ranges in every direction laying strewn with Hindu icons. Auli is the embarkation point for some of the world’s most intense pilgrimages.”

Saag is prominent in Northern India, and is prepared in a variety of ways. The basic recipe is spinach leaves (or similar leafy greens, such as mustard and kale) are finely chopped, then sautéed with a variety of spices. The most well-known rendition calls for pan-seared paneer: a fresh cheese used in a variety of South Asian recipes. Tom opts for tofu, which is both healthier and easier to find in local grocery stores than paneer. The sautéing takes a bit, but that golden hue gives this dish a texture and taste that’s extraordinary! 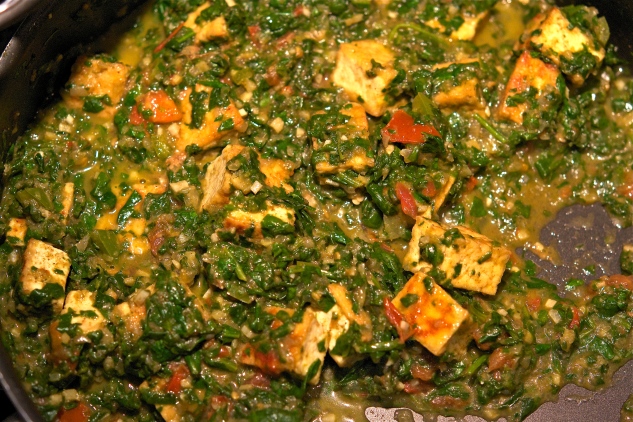 I have made Saag before, but this is by far my favorite recipe – the flavors are complex, and the textural aesthetic is stunning. Some varieties use cream, yet this recipe is vegan and chock-full of spices: cumin, coriander, fenugreek, and garam masala. The key (per usual with Tom’s recipes) is to dry-roast the spices one at a time, then grind them to a fine powder. It comes together in no time once all of the ingredients have been prepped. Don’t fret if you have leftovers, as it’s even better the next day. Click HERE to see the recipe for this flavorful side!

Tikka Masala is one of those dishes that nearly everyone loves – comprised of roasted chicken simmered in a creamy sauce, it is one of Tom’s signatures. Similar to Saag, cooking the protein separately aids with the texture and flavor of the final dish. The marinade yields a beautifully tender meat that is hard to beat – yogurt is the secret weapon here. Acidic marinades have been known to “denature” (or toughen) the meat, whereas milk-based marinades won’t. It is alleged that the calcium helps to activate certain enzymes that break down the proteins, creating a more tender and flavorful meat. South Asian and Middle Eastern cultures have been using dairy-based marinades for a looong time, for good reason!

The masala, unlike the marinade, is fairly complex – a medley of spices, healthy fats, and vegetables come together to create a creamy sauce that is both spicy and rich. The original calls for a lot of cream, but Tom lessens the cream needed by upping the almonds. The result gives the sauce more character without inhibiting the spices and aromatics. This dish is both filling and loaded with protein, making it a perfect meal for those colder days. Click HERE to see the recipe for this beloved classic! 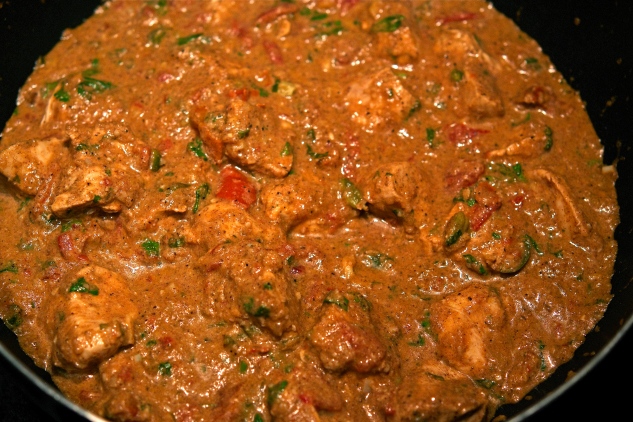 Winter often gets a bad rap – slushy sidewalks, dry skin, chilly and biting winds – and it’s frozen beauty is often disregarded. Some of the most gorgeous landscapes I’ve witnessed were in the coldest climates (Tom would readily agree). Case in point – the below photo is from a hike we took together in Montana

about a year ago. It is one of my favorite pictures to date, and yet I was freezing my tail off the entire time! Spring, summer and fall are often flooded with activity – it is winter that gives us a moment of stillness, in which we may breathe and experience our world. This led me to choose Tchaikovsky’s Symphony No. 1 in G minor, “Winter Dreams.” This symphony is arguably the cheeriest (and least tortured) of his six symphonies. It has a youthful air, which can be attributed to the fact that he was only 26 when he wrote it. In this symphony (just over 40-minutes in length), Tchaikovsky paints the isolated beauty of a Russian “winter journey” using rich orchestration balanced by gossamer melodies. The piece captures the dynamics of this posting’s two dishes, while also alluding to the tranquil enticements of winter. The below recording features Bernard Haitink and the Royal Concertgebouw Orchestra – enjoy!