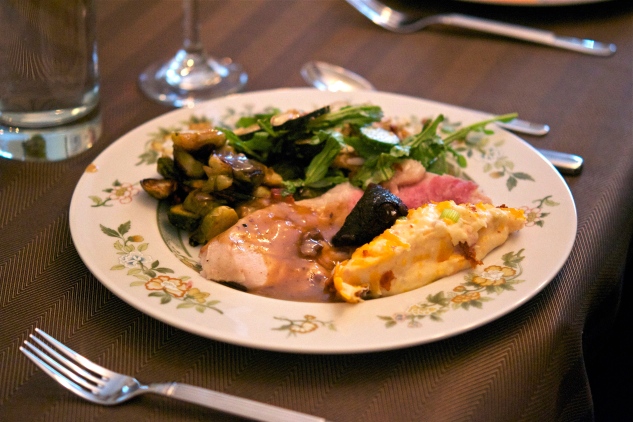 Tis the season to spend time with loved ones while eating lots of food! It’s also the time of year that I find it extremely difficult to keep up with my blog, between holiday parties and travel. Thanksgiving is always a big project…but it’s also one of my favorites to blog since the memories and recipes are worth cherishing. I flew down to Atlanta for the second year in a row to celebrate Thanksgiving with my mother’s side of the family, my sister Sarah and her boyfriend, and my boyfriend Tom.

Aside from being way warmer than Boston, the trip was filled with lots of family moments and holiday cheer. While I spearheaded most of the cooking, my sister made a ton of food (two of her recipes are featured below) and the rest of the family helped out with odds and ends: peeling potatoes, lifting heavy pans, etc. When planning something for a party of 12, there is often the fear that there won’t be enough food. In my world, this translates into overcompensating and creating way more food than is actually necessary. See the below photo…

The main meal turned out really well, and there was plenty of food to spare. Since it was such a sizable spread, I decided to highlight a few of my personal favorites for this post:

To start, we had several great appetizers to keep people occupied while the turkey and ham were finishing up. The above appetizer was courtesy of Smitten Kitchen (one of my favorite blogs) – it is healthy, picturesque, and delicious. Tom made the topping, and changed the recipe by doubling the pecans and parsley and omitting the celery altogether. It was a hit. Those who know me know that I’m a bit of a sweet potato addict…so I polished off quite a few of these in between my cooking bouts.

The next starter was my sister’s contribution, a cheesy corn dip. It’s one of those appetizers that you have no idea what it’s going to taste like until you try it. Sarah insisted on making it, and I’m happy she did – that bowl of tortilla chips had to be refilled at least twice, which is why this is a recipe worth sharing. It will probably be something I add to my hosting repertoire, and would be perfect for a Superbowl spread.

Now let’s talk about the turkey: this is the second time I’ve prepared the bird using a dry brine, and I’ve come to believe that it yields a better result than a wet brine. While both produce a tender meat, a dry brine guarantees a deeper flavor, and the meat’s texture will be juicy instead of “watery”. Every family has a different method, and it really comes down to preferred tastes and comfort with preparation. It’s a tough bird to cook, especially considering most people get one shot at making it per year.

Thankfully my family is an easy crowd, and they all loved it. The preparation and roasting was fairly similar to what I’ve done in past years (Check out my first, second, and third turkey attempts), and I can always rely on my trusty All-Clad roaster. There are two things things I did differently that are worth mentioning: first, I tented the bird for most of the cooking process, and second I flipped it with the backbone facing up so the juices would keep the breast meat from drying out. It’s not as elegant a presentation as the traditional, but it did the trick! 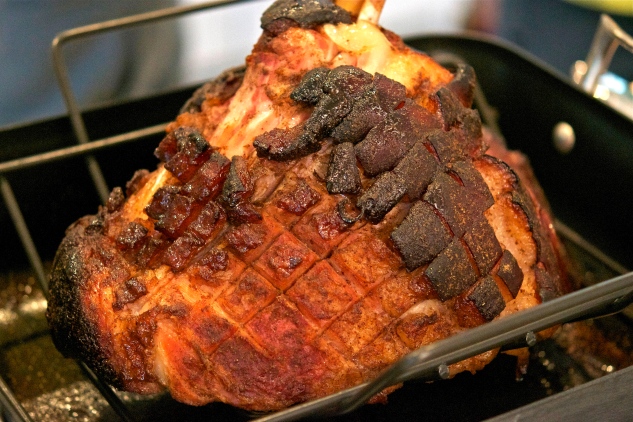 Back to the overcompensation bit, we decided to throw in a ham for some extra protein – it was my sister’s recipe, and she’s got this down to a science. Ham, similar to turkey, is a meat that’s typically served only during the holidays. Granted, people enjoy ham sandwiches or breakfast slices any time…but an entire ham is a rare thing to see. The glaze was fantastic, and kept the meat perfectly moist. Overall, it’s a wonderful complement to a Thanksgiving spread (and made for amazing leftovers!)

The salad was the “wild card” on the menu. The original recipe has you whisk together all of the ingredients for the vinaigrette…but I decided to emulsify the dressing with a hand blender instead. The result looked somewhat like Pepto Bismol but the flavor profile was (of course) far from it: it was fruity and bright with a bit of an edge (thanks to the ginger). Tossed with the roasted squash, peppery arugula, sparkling pomegranates, crunchy almonds, this salad and vinaigrette make for one hell of a side dish. 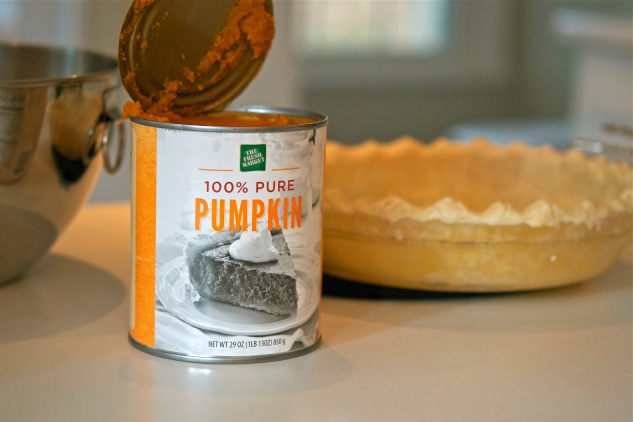 The pie was a bit of an experiment. While the filling was fairly straightforward, the crust itself used buttermilk. The result was a flaky crust with a slight tang, but also a profound buttery taste. The filling was creamy and filled with spices. In an effort to add a decorative flair, I made some candied pecans for garnish – I couldn’t help but notice my relatives picking the pecans off of the uneaten pie…which means it was worth the extra effort. Overall, it was a truly memorable Thanksgiving, and I feel both thankful and fortunate to have such an awesome family. 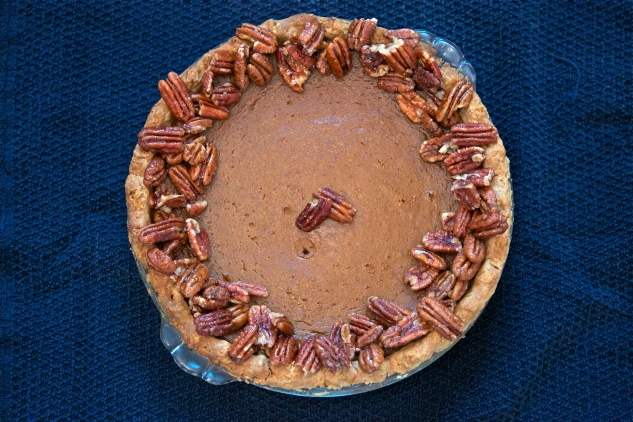 Given my love for cooking (and fear of having too little to eat!) every Thanksgiving feels like a banquet – the food is plentiful, the wine is flowing, and the laughter is endless. In describing the meal to my coworker Emilio, he suggested I turn to the 15th century for my musical inspiration, and to look at the Feast of Pheasant: a banquet hosted by Duke Philip the Good of Burgundy in 1454, renowned for its excessive luxury. It’s sole purpose was both to celebrate and officiate an anticipated crusade against the Turks to regain sovereignty of Constantinople.

The extravagant feast included a tradition practiced across Medieval France called the voeux du faisan, where nobles would take oaths upon a living bird – in this case, it was a pheasant. Aside from these formalities, the guests was lavished with food, wine, minstrels, theater, and live music…Guillaume Dufay, a highly renowned composer of the French Renaissance, was one of many invited to write original works for the celebration. While chronicles of the actual musical program are vague, there are three works commonly believed to have been included: Lamentatio sanctae matris ecclesiae Constantinopolitanae (“Lament of the Holy Mother Church of Constantinople“), Alma redemptoris Mater (“Loving Mother of the Redeemer”), and Je ne vis oncques la pareille (“I Have Never Seen the Equal”)…though some ascribe this last work to Dufay’s contemporary, Gilles Binchois. While discrepancies are present, for the sake of this post I will stand by the assertion that these are all connected to Dufay. To give a sense of what the music was like for such a feast, I thought I would showcase all three of the pieces. Enjoy, and Happy Holidays!!!