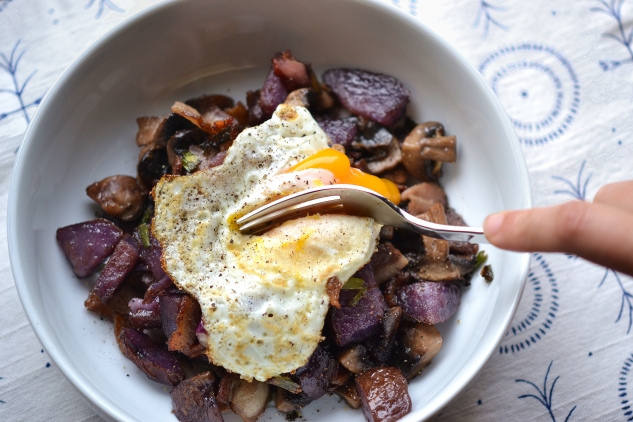 Brunch is awesome. I would eat breakfast at every meal if I could. I credit eggs being such a versatile and easy protein. I also love cooking breakfast for people I care about. So when one of my favorite humans made a trip to New York – my best friend Megan – we scoured Pinterest for some culinary inspiration. What we found was not only simple, but super tasty: Bacon & Mushroom Hash with a Fried Egg. 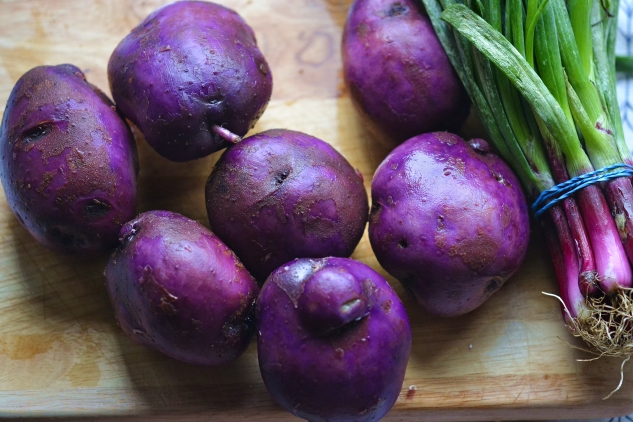 Brooklyn has some fantastic open-air markets – where everything in season is Insta-worthy, plentiful and downright delicious. My favorite produce stand had these dark purple potatoes and violet scallions, so we grabbed a handful of each. I spoke a bit about anthocyanins in my last post – so clearly I’m on a theme with ruby-tinged produce. In the event you can’t find these ingredients, or you are enjoying a lazy day indoors, you can use just about any vegetable in a hash: sweet potatoes, corn, Brussels sprouts, bell peppers, kale. Go wild! 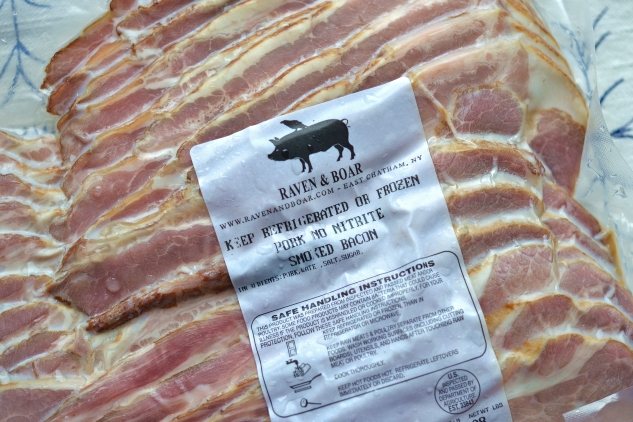 There was one stand I had never visited (until now) called Raven & Boar. They were sampling one of the most delicious bacon jams. We were hooked, so we bought a full pound and a half of their bacon…naturally. A good two-thirds of it is currently sitting in my freezer as our eyes were clearly bigger than our stomachs. We used this smoked variety that reaalllly put the dish over the top. Thicker bacon is key since you will be chopping it into the hash, but any variety will do. We also decided to cook the eggs over easy, because I could not resist the photo op that you saw at the opening of this post. We also drowned our plates in Frank’s hot sauce – highly recommended, if you’re a spicy fan. Click HERE to see the recipe for this hearty breakfast. 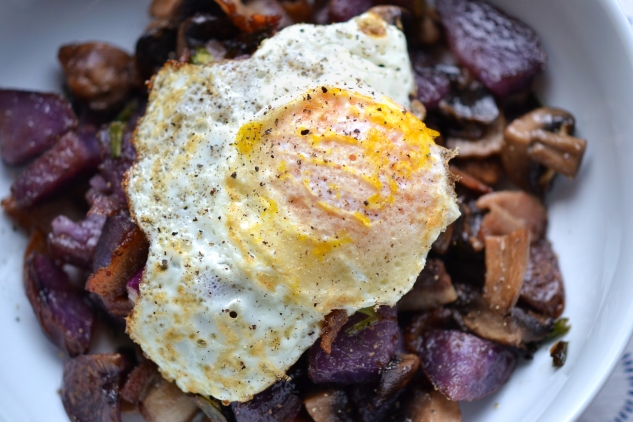 For the last few weeks, I’ve been reflecting on new beginnings. Starting a new chapter can be scary (really scary) and yet the future holds nothing but adventure for those brave enough to try something completely different. Megan’s trip to New York was to mark such an occasion. Opening yourself to new experiences can be breathtaking, but remembering who you are – and where you come from – is what gives you the strength and excitement to start anew. This is why I chose one of the first pieces I had ever prepared for an audition: Francis Poulenc’s Sonate pour flûte et piano, written in 1957.

Poulenc was a French composer who studied with the renowned Erik Satie. His success, fueled by his talent and Satie’s musical connections, led to his inclusion in the acclaimed Les Six: a group of 6 young composers – all French – whose music openly countered the traditional styles of the time; most notably Wagner and Debussy. Speaking of new beginnings, this Sonata was the first Poulenc ever wrote for the flute – much to the delight of colleague and flutist Jean-Pierre Rampal, who would perform the première (with Poulenc on piano). Like the dish, the piece is simple yet rich. The music traverses a spectrum of expressive colors: from a verdant allegretto to a lavender cantilena and finally closing with a red-hot presto. The following recording features my favorite flutist – Emmanuel Pahud. Enjoy!