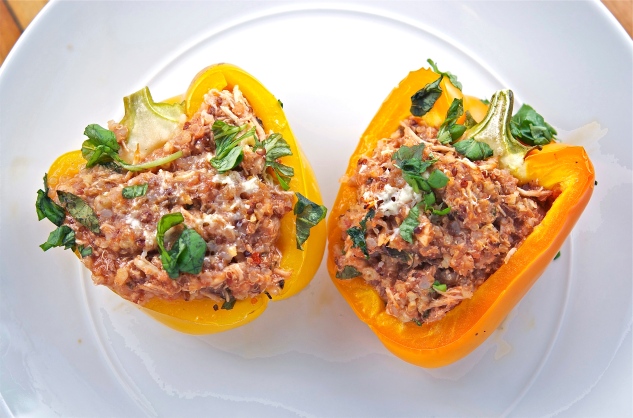 Directions:
Bring chicken broth to a boil, and add the chicken breasts – lower heat to a simmer, and cook until all of the liquid is evaporated (45 minutes to 1 hour).

Meanwhile, cook the quinoa – add 1 cup of water to a small pot, and bring to a boil. Stir in the quinoa, cover with a lid and lower to a simmer. Allow to cook until all of the liquid is evaporated (between 10 to 15 minutes). Set aside and allow to cool while the chicken continues to cook.

Once the chicken is done, use two forks to pull the chicken meat into shreds – stir into the quinoa, and set aside (can be made one day ahead, refrigerated and covered).

Heat oil in a large saute pan over medium heat. Add the onion and shallot, and cook until translucent (3 to 4 minutes). Add the garlic cloves and salt, and cook for an additional minute. Carefully pour in the wine to deglaze the pan. Scrape up any browned bits, and allow the wine to reduce – once it’s reduced to a fourth of it’s original amount, add the tomatoes, dried herbs, and a cup of water. Bring to a boil, and allow to simmer for roughly 30 minutes or so. Season with salt to taste. Optional – add the sauce to a blender and puree until smooth (can be made 2 to 3 days in advance; flavor will improve with time).

Combine the tomato sauce with chicken-quinoa mixture in a saucepan – heat gently over medium heat until simmering. Cover with a lid, and prepare the bell peppers.

Preheat your oven to 400 degrees. Arrange bell pepper halves into a large baking dish. Grate some fresh Parmesan into the filling mixture, and mix to combine. Place about 1/2 cup of the filling (or more) into each of the bell pepper halves. Cover the baking dish with aluminum foil and set into the preheated oven. Baked for 25 to 30 minutes – remove the foil, grate additional parmesan on top of each stuffed bell pepper and cook for an additional 5 to 8 minutes. Remove from the oven and garnish with basil and (if you’re a cheese lover) additional Parmesan. Serve immediately!

To read more about this dish and my musical pairing, click HERE.