“These are the best macaroons I’ve ever had, and trust me – I know my macaroons!” I’m not usually one to brag, but this compliment (from my coworker Dianne who loves coconut) only confirmed how simply amazing these cookies are! I originally made these for a friend to congratulate his big win with the Spokane Symphony (congratulations Ross!) Wanting to create something both quick and easy, I came up with these Chocolate-Dipped Coconut Macaroons. I brought the remaining cookies to my office the next day – they disappeared almost instantly.

Though most Americans associate these as being macaroons, the “authentic” macaroon has no coconut whatsoever! It is instead a meringue-like cookie, made from almond paste and egg whites, that is believed to have originated within an Italian monastery several centuries ago. The term macaroon is derived from the Italian term maccarone, meaning “paste.” While the coconut variety is extremely popular in the US and the UK, its delicate, almond cousin takes the lead elsewhere.* That being said, if you like coconut and/or chocolate, you won’t think twice about these cookies’ departure from the norm – click HERE to bake a batch of these today! 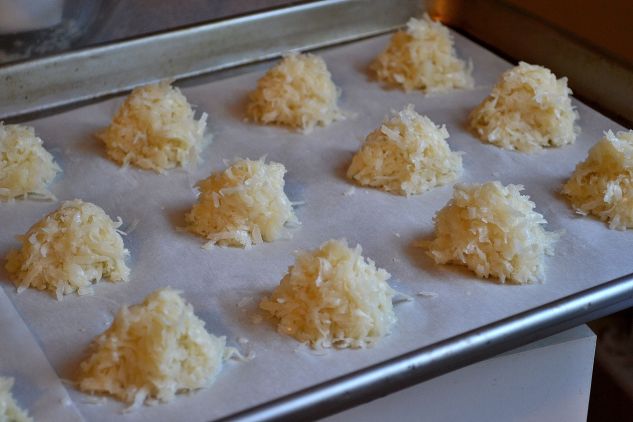 And now for the musical pairing – I have to admit, cookies are always an interesting case for me. They can generally be assembled and baked in under 30 minutes. While these cookies were really easy to make, they had a surprising depth of flavor. This led me to choose a composer who is often seen as being simple, yet is far more complex when experienced: Bach. I chose his Fugue in B minor on a theme by Tomaso Albinoni. While there are only two voices in the work, it is beautifully intricate and surprisingly profound. The recording is by Glenn Gould, whose playing of this difficult fugue seems so entirely effortless – enjoy!