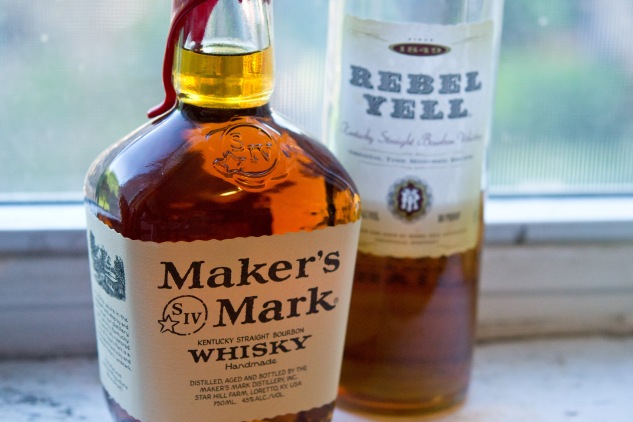 Every May, there is a sporting event that has a reputation for lots of food and good bourbon: the Kentucky Derby. My close friend Beth hosts an annual party that is true to tradition, and for a 90-second race it is always a total blast. Friends pack into the apartment with crazy hats and summer attire for an evening of southern-style cuisine and Kentucky-style drinking. Every year I make a TON of food for this, and it’s a chance for my Georgian roots to shine 🙂

For large parties I always make Bourbon Smoked Sausages – they are easy, filling, and amazing! You can use any type of meat you would like, though I highly recommend smoked sausage. I used sliced sausages in this instance, but the cocktail sausages are even better. The sauce is pretty easy, and acts as a great foundation for a sweeter, spicier, or smokier dish. For parties like this one, I keep it simple, and it still is the star of the night – click HERE to see the recipe for this must-have party app!

You can’t have a southern-style spread without Deviled Eggs, Paula Deen would be furious! Since the Queen of Butter has a love for these little bites, I always make a “lighter” version for my guests. The traditional method requires a LOT of mayonnaise, while  I prefer to highlight the eggs’ natural flavor (in other words, using only a touch of mayo for substance). Shallots and hot sauce are my staples in this dish, though this also a very customizable recipe – click HERE for this “devilishly” good appetizer!

I also made a Hummingbird Bundt Cake – a southern gem I have always been curious to try. While the combination of pineapples and bananas is what you would only expect for Daiquiris (or similar boozy concoction), they work wonders in this cake. It is basically a glorified banana bread, with a moist crumb and a nutty topping. Are you drooling yet? The result was quite lovely, and guests were practically “humming” after every bite – click HERE for the recipe to this southern classic.

A rule of thumb for any southern chef – you can never have too much dessert. Why this is the case…I have no idea, but I listen to it. So among the many desserts that evening, these adorable Oreo Truffles were one of my favorites. Like almost everything else for the party, they were simple to make – a mere three ingredients, and yet each was bite-sized piece of heaven. I make these the night before serving them so they are ready to go (especially since the chocolate coating can take a little while). Click HERE to see the recipe for these adorable treats!

For the musical pairing, I wanted something that was celebratory…and there’s rarely anything more joyous than good ol’ Mozart. While many of his compositions were written for staged performances, he also wrote a number of works for the entertainment of nobility (which were often premiered at parties). It was a much-needed form of income, and served as backdrops for a number of social occasions. These works often included divertimenti – a genre known for being lighthearted and entertaining. Written for smaller ensembles, this genre often served as “background music” for social settings and occasions. Because of this, Mozart didn’t extend too many complexities or profundity to these compositions, and they were for the most part quite simple and playful. For this particular pairing, I chose his Divertimento in D major, K.251 – written for oboe, 2 horns, and strings, the piece has six movements in total. There is only one slow movement, while the other 5 movements each have their own character. The more notable movements are the first, which is a flirtation with the sonata-style, and the last, which is based on the French style of a traditional march. Though it’s no Requiem or Symphony, this “morsel” of Mozart’s is the perfect pairing for such an entertaining spread – enjoy!