I would like to dedicate this post to Drew Thompson – bassoonist, swing dancer, beer connoisseur, and devoted friend. We’ll always remember you (1986-2013) 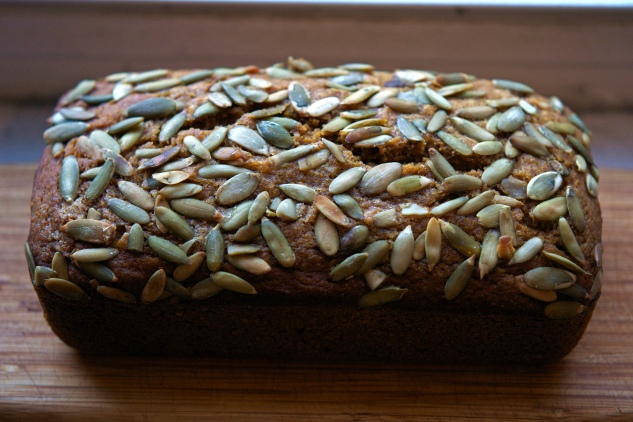 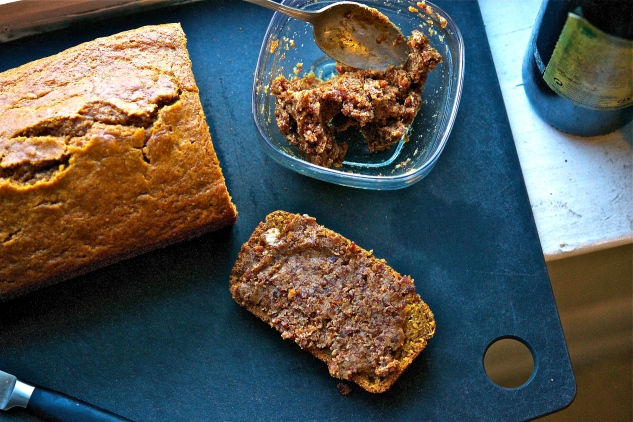 When writing this post, I couldn’t help but picture a figurative angel and devil on either shoulder: the angel being an advocate for all-things healthy, and the devil espousing those dangerous temptations we’re taught to avoid (read “fatty goodness”). Here we have two quick breads: both were baked in my favorite Pyrex loaf pan, contain pumpkin, and finished cooking in just under an hour. The affinity ends there – while I pride myself on being a healthy and active individual, breaking the rules for a decadent treat can be such a release. My shoulder angel would approve of the Maple-Spice Pumpkin Bread with Pepita Crunch, but the Pumpkin-Beer Bread with BACON JAM is most certainly a devilish indulgence. 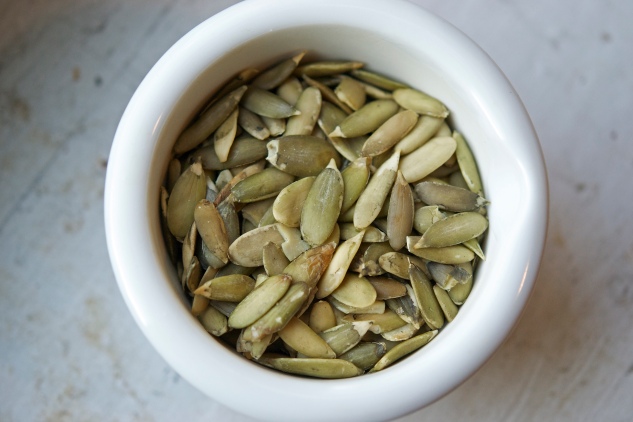 Let’s start light (even though you’re all here for the bacon jam) – most pumpkin breads call for sugar or butter, bumping the health quotient down a notch or two. Olive oil and maple syrup are the featured ingredients in this recipe, yielding a bread with a moist crumb and a subtle sweetness. The pepita topping is adorable…and I just happen to have WAY TOO MANY PEPITAS right now, so this was perfect 🙂 In case you’re wondering, a pepita is the edible portion of a pumpkin seed (having been removed from the more recognizable ivory-colored hull). They are fun to snack on, but (if you’re like me) it’s way easier to buy pre-packaged trail mix for your midday nosh…I’ll throw a handful of these into those mix packs every now and then as well. 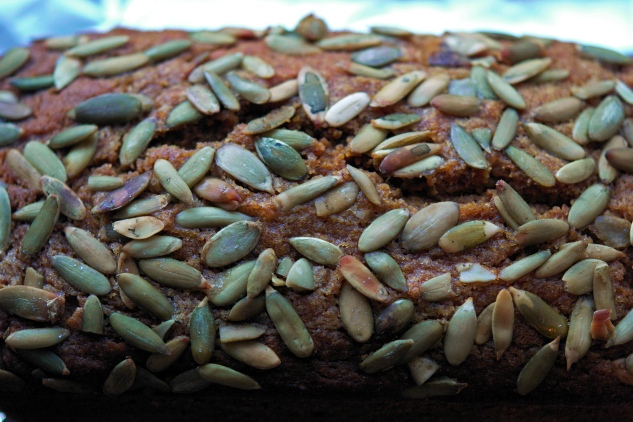 Cloves, cinnamon, nutmeg, and ginger make for a potent spice mix – I guarantee that your kitchen is going to smell like heaven. The resulting loaf is both stunning and aromatic, invoking thoughts of New England Falls and warm nights by the fire. As the literary figure Anne of Green Gables once said, “I’m so glad I live in a world where there are Octobers.” (So I quoted a character who shares my name…biased, but I LOVE October!) This bread is perfect on its own, but a touch of honey or even butter would be a beautiful finishing touch. Click HERE to add this recipe to your seasonal repertory! 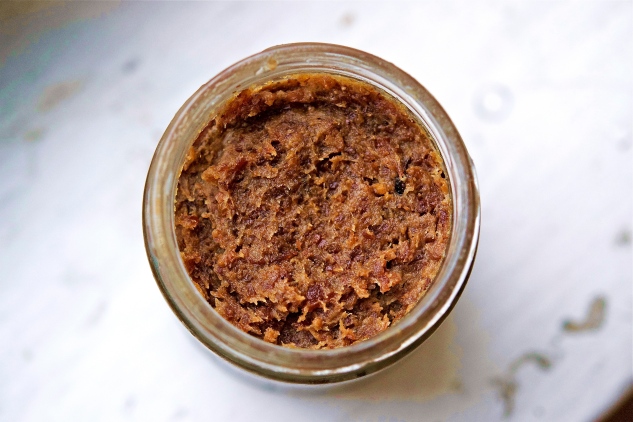 [CUE about-face, and change into stretchy pants] – so let’s talk bacon: arguably THE fat of  choice in our nation. According to a survey published earlier this year, 69% of American households buy bacon…making it the second highest red meat of the country’s overall purchases. It appears in everything from breakfast casseroles to ice creams, so no surprises there. There are those who would go so far as to say that bacon is the “olive oil” of North America. I don’t know if I fully agree, but this jam gave me a new perspective on its potential – it’s akin to flavored butter, and doe not have an overwhelming “bacon-y” taste. It’s a really simple process, and the jam will last for a month in the refrigerator…if you manage to not eat it all in one sitting. Click HERE to see the recipe for this sinfully delicious spread! 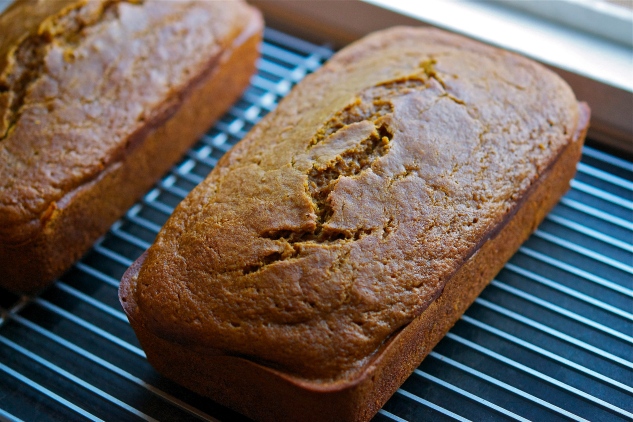 While the jam is ridiculous, the bread is just as drool-worthy. It’s loaded with pumpkin, thanks to a healthy dose of pumpkin purée AND pumpkin ale. Like the former recipe, you’ll be adding a handful of the fall’s best spices (my hand is much smaller than others’…so make that an “Anne handful” of spices). There is some whole wheat flour in this recipe, but once you’ve melted the butter, poured in the ale, and spread on the bacon jam…well, let’s just say now is not the time to focus on the “nutritional” elements. Indulgence is the reward, and this combo will certainly meet your expectations – click HERE to see the recipe for this richly flavored fall bread! 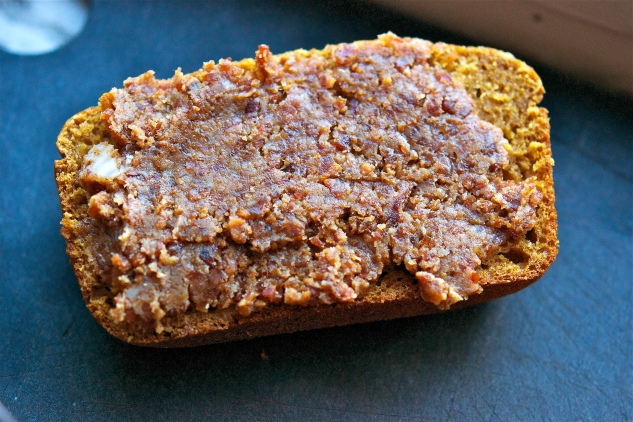 Quick breads can go one of two ways – a healthy alternative for breakfast, or a decadent treat for dessert. At the end of the day, they all have a shared seasonal aesthetic and ease of preparation. These were both pumpkin breads, but the results were as different as night and day. While many composers valued the concept of opposing forces, one who particularly stands out was Robert 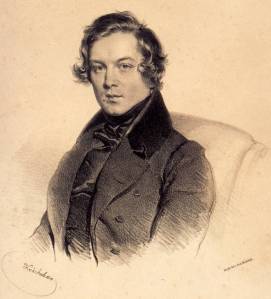 Schumann. His music was often guided by the impressions and emotions of various personae. In fact, he even drew inspiration from his own “multiple” personalities, most famously depicted through the characters Florestan and Eusebius. On the one hand you have Florestan – the outgoing adventurist driven by impulsive desires – and on the other Eusebius – the careful wallflower whose interests are more scholarly than enterprising. These two personalities are prominently featured in Schumann’s Davidsbündlertänze (Dances of the Tribe of David): a group of 18 pieces for solo piano. Each is inspired by one or both characters, alternating between impulsive fervor and melodic contemplation. It is a truly marvelous collection – the pieces are described as “dances”, but act more as a back-and-forth dialogue between these two antithetical voices of Schumann’s nature. The following recording features pianist András Schiff – enjoy!