It’s getting to be that time of season where I hate leaving the warmth of my apartment…which is a bummer because I love being outdoors. Then again, one significant pro to colder weather is the seasonal food – a necessary comfort to the portending cold that is New England winters. Meals are heartier and even more flavorful to help us put some “meat on our bones”. Not surprisingly, a number of Indian dishes fit beautifully in this context; a cuisine with which my boyfriend has developed quite the expertise. To recap this series: Tom is a veteran traveler, whose culinary tastes have been greatly inspired by his experiences abroad. He made this Lamb Kofta with Tomato & Yoghurt Sauce a while back, which I’m craving now more than ever as the cold slowly creeps through my apartment’s lousy window units. 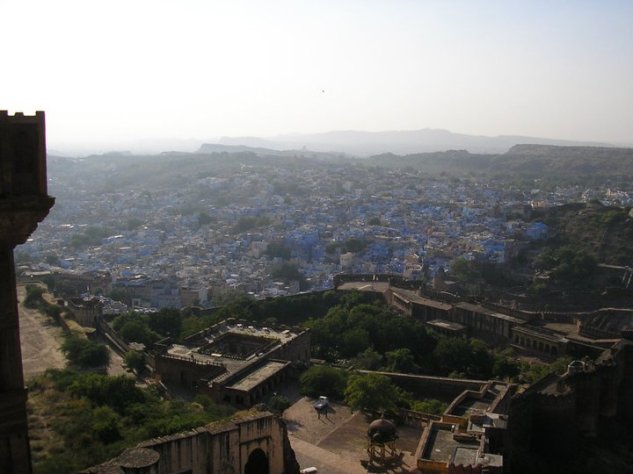 This dish holds a special affinity with Tom’s travels in Rajasthan: India’s largest state, located along the Pakistani border in the Northwest. He shares his experiences below:

“As you progress west, away from the Indian heartland toward the Pakistani border with Rajasthan, availability of food changes drastically. The landscape of Rajasthan is a rugged marriage of mountain foothill and high desert, dotted with magnificent palaces and fortresses built many centuries ago by the Rajput empire. Leaving Jodhpur, the “Blue City” on the road west (pictured above), I knew I’d had my last chicken for a while. As the terrain flattens and gives way to brush and sand dunes the only available meat becomes goat, mutton and lamb, and the latter will cost you. Past a thousand year old desert fortress made out of sandstone called Jaisalmer, I spent a few days out in the desert with Indian guides and a small pack of camels. A German, an Australian and myself had had our fill of vegetarian food, and persuaded the guides to barter with a nearby village for a goat. The Indians insisted that it wouldn’t be right for any of the westerners to kill the animal, and took it to a quiet corner. That night we barbequed on the sand and had more ropey meat than we knew what to do with.”

Like most of Tom’s recipes, this dish is redolent with Indian spices. One thing I learned from Tom is that most cookbooks underestimate the amount of spice you should use, in hopes of creating a recipe that isn’t “too intense” for the average Joe. The result is often dishes that are a little bland…Tom and I want a meal to punch us in the taste buds, so we go a little crazy (he asked me to put a warning here: dishes like this can result in a spice addiction, leading to an inclusion of spices in everything from your breakfast cereal to chocolate cake…) Another thing I should point out is Tom’s choice to purée all of the onion in this recipe (as opposed to simply chopping or mincing) – half of this is out of personal preference, but the other half is to help enrich the texture. The purée acts as a thickening agent, creating a smoother and more aesthetic sauce.

The name of this dish is derived from the Turkish term küftə – which translates to “small ball.” Kofta is a fairly popular item on most Indian and Pakistani menus, having been introduced to South Asia following the Muslim ascendancy in the region. It is commonly cooked in a spiced gravy or curry sauce. Call me naive…but I picture it as a more exotic rendition of spaghetti and meatballs – both are simmered in a tomato-based sauce, loaded with regional herbs/spices, and served atop a carb of choice. Kofta is the more interesting of the two in my opinion, and possibly more nutritional as well. 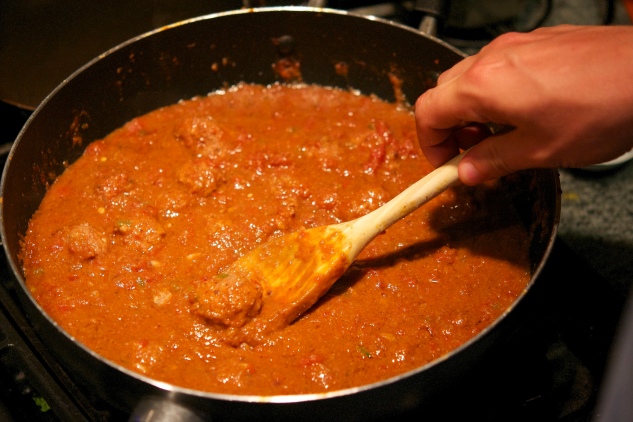 This was love at first bite! I’m not a big fan of lamb, but the character it lends to this dish is undeniably perfect. You can serve the Kofta with basically anything you want: brown rice, white rice, quinoa, naan…or you can eat it directly out of the pan if that’s your style. Dishes like this can be your greatest ally on colder nights…like tonight. It tastes even better the next day, so go ahead and cook yourself a batch for the week – you can enjoy leftovers inside your warm home, while watching another episode of Breaking Bad and not thinking twice about the dropping temperatures outside: click HERE to see Tom’s recipe for this delicious Kofta!

Tom’s experiences in India give him a unique advantage regarding its cuisine – he is no longer a slave to Indian cookbooks, and can easily modify and/or create meals based on his own practiced understandings. In the classical music world, an analogous parallel would be Béla Bartók’s compositional process. Born

towards the end of the 19th century, Bartók (pictured left) was well-known for incorporating folk music into his own works. Over time, he became increasingly familiar with the harmonic and melodic tendencies of this music that he eventually was writing his own folk melodies. Bartók’s entire style took a whole new direction from then onward, and has placed his works among the more innovative to come out of the 20th century. One great example is his Dance Suite (Táncszvit) – the work was premiered in November of 1923, just five years after the end of WWI. While the piece has melodies of Hungarian, Romanian, and Arabic influence, the themes are all Bartók’s own. The work consists of six dances, but is audibly perceived as two movements. It opens with bassoon (which reminds me of Stravinsky’s Rite of Spring – 1913), and the orchestra pulses between moments of kinetic intensity and gentle reflection over the next three dances. At the end of the third dance, we reach a climax that feels decisively conclusive. Yet the fourth movement slowly emerges, immersing listeners into a dreamlike realm. We then transition into the brief yet energetic fifth dance, which finally cascades into the sixth dance where the work’s many themes are resurfaced for an exciting finish. The below recording is with the Deutsches Symphonie-Orchester Berlin – I hope you enjoy!