For many, take-out Chinese is a beloved ritual: the sauce-laden dishes packed into decorative food buckets have become a movie night staple (in fact, I’m about to enjoy such an evening with my new roomie Megan!) Yet let’s be honest…it’s not the healthiest of cuisines. In fact, the nutritional detriments outweigh nearly all of the benefits. By no means does this mean you should forfeit your occasional Friday night movie and Chinese take-out tradition. But there’s a much healthier way to enjoy the cuisine for the rest of the week – give homemade a go! My boyfriend Tom loves to cook Chinese food, and his Kung Pao Chicken is possibly the best I’ve ever had (take-out included). 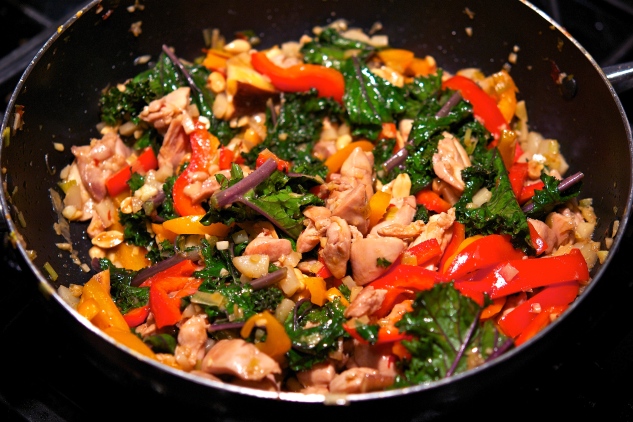 Most of Tom’s recipes on this blog have highlighted the cuisines of Southeast Asia (under the aegis of South of the Orient series [hyperlink]), yet this is the first recipe of his that comes from the Orient proper. The dish – also known as Gong Bao or Kung Po – originated in the Sichuan Province of southwest China. It is named after Ding Baozhen: a governor of Sichuan during the Qing Dynasty. It is claimed to have been one of his favorite dishes, and was thus named in his legacy.

However, its connection to an imperial official was later repudiated by radicals of the Cultural Revolution: a pro-communist movement from 1966 to 1976 that sought to eradicate cultural and capitalist traditions in China. The dish was therefore referred to as hong bao ji ding (“fast-fried chicken cubes”) or hu la ji ding (“chicken cubes with seared chiles”). The name Kung Pao was reinstated during China’s political reformation in the 1980’s. 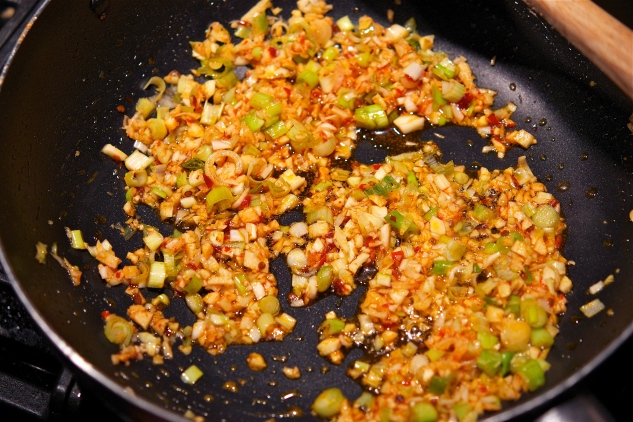 It’s a classic stir fry of chicken, peanuts, and vegetables, and is famously known for having a spicy kick. The traditional recipe contains Sichuan peppercorns (which I’ve blogged about before), but isn’t a necessary ingredient. Tom’s version relies on Chinese chili paste, which is gently sauteed with a variety of minced aromatics. This step is where the magic happens – the rest will come from the sauces and ingredients, but these aromatics set up the base of this dish’s awesomeness.

The best part about Tom’s take on this recipe is the copious incorporation of vegetables: we used a mixture of kale, bell peppers, and mushrooms. You can use whatever variety of vegetable you prefer, increasing or decreasing the amounts as needed. That being said, the two “add-ins” that should remain are the chicken and the peanuts (which really make the dish). The result is a meal that is both healthier, more colorful, and much tastier than take-out: click HERE to turn this classic into a homemade tradition!

At the end of China’s cultural revolution mentioned above, the nation was longing to reawaken its artistic ambitions. The Central Conservatory in China reopened its doors in 1977, with the intention to accept no more than 100 students. 18 THOUSAND applications arrived, all of whom were desperate to pursue an art form they had been forced to abnegate for the past decade. The Conservatory accepted 200 students that year, with a number eventually joining the ranks of

the internationally renowned musicians. One of the most notable graduates of that class was composer Tan Dun – his style is a unique fusion of Western, traditional Chinese, and experimental styles. In 1997, Tan Dun was commissioned to write a piece celebrating a truly historic moment for China: the return of Hong Kong to Chinese sovereignty from British rule. The work was premiered at the reunion ceremony (pictured right), titled “Heaven, Earth, Mankind – Symphony 1997”. The symphony is a large-scale work for solo cello, Bianzhong bells, a full orchestra, and children’s chorus. It is a celebration of the old, the present, and the future, paying tribute to the values of ancient China while looking forward to a new global community. The below videos are two excerpts from the work, titled “Jubilation,” and the “Song of Peace” (the videos are a little bizarre, but are the only two I could find on YouTube) – enjoy!