August was HOT. The temps in Seattle were much higher, on average, than usual. As a consequence of these norms, the city doesn’t believe in air conditioning…so Tom and I were on the lookout for any solution to cool down. In many parts of the world, heat is met with more heat. Whether it is an Indian drinking hot chai or a Jamaican enjoying jerk chicken (seasoned with must-have Scotch bonnets), a variety of cultures turn to hot and spicy foods in the sweltering heat. The reason? It makes you sweat, and sweat cools you down. I’m no scientist, but we were desperate and willing to try anything. So we decided to indulge in our own spicy experiment with Pad Kee Mao.

This recipe did not come out of a cookbook. Tom learned how to make the dish while living in Southeast Asia; in Laos, Thailand and Malaysia, primarily. He spent about a year in the region, split between a pre-college getaway and a post-college return.  The above photo was taken by Tom in Tham Kong Lo: a cave that extends for 7 miles. He shares more about the adventure:

Our small gang of backpackers had convened at a grass hut guest house the night before, the entire village having lost power at 7PM (daily occurrence) we’d bonded over candlelit noodles and communist beer (Beerlao), and planned the following day’s excursion. Tham Kong Lo is a stalactite-riddled mega cave that stretches deep underneath miles of limestone karst, home to a singular, somewhat terrifying ecosystem and traversable only by canoe. There’s darkness in familiar settings and then there’s pics, oily darkness pregnant with bats, giant spiders and dripping with humidity. Everyone should experience the latter at some point, if only for the experience of emerging renewed and soaking wet into a lush jungle valley at the other side, sunshine streaming through the banyan trees.

When Tom shared this story with me, I was inspired to recreate an image of those “stalactites” using our noodles…it was one of those things that sounded way cooler in my head. But the photo also illustrates perfectly al dente rice noodles, so I kept it. Moving on, many of us know Pad Kee Mao by it’s English title: Drunken Noodles. Khi mao is Thai for “drunkard”…yet the source of this appellation is a bit of a mystery. Some believe the first-ever recipe included rice wine, while others attribute the recipe to a drunken chef who concocted the dish with whatever was available in his home after a long night out. Regardless, it is now one of the cuisine’s most famous celebrities, and for good reason.

The dish is spicy, but can be moderated to your taste by de-seeding the peppers or omitting them entirely. It brings together a variety of rich flavors in a fairly quick preparation: oyster sauce, chili paste, soy sauce, fish sauce, and loads of veggies. Tom cooks the dish so that there is very little liquid left in the pan before serving – so there is some patience involved. But the end result is absolutely worth the wait. You can include one or a medley of proteins (we used both chicken and tofu in our recipe). One key ingredient, flavor-wise and aesthetically, is basil: you can use Thai or regular, just be sure to have a whole heap of it. Click HERE to see the recipe for this spicy dish. 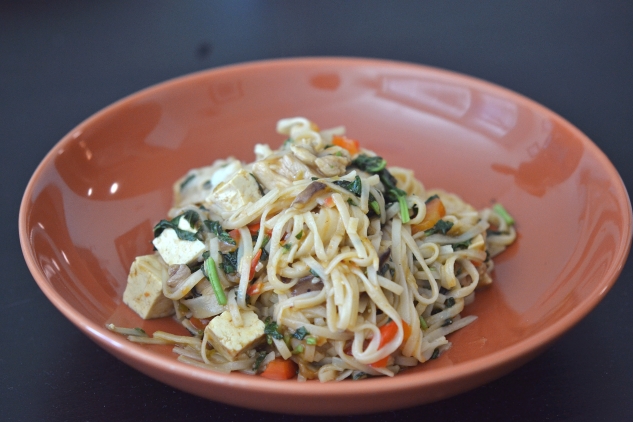 When you eat something spicy, not only do you sweat – your heart rate also increases…much like my own whenever I think of playing the opening lines of Jacques Ibert’s Flute Concerto. Written in the doldrums of the Great Depression, the work was commissioned by the renowned flutist and pedagogue Marcel Moyse. It is surprisingly lighthearted for the era yet far from frivolous. Even with a reduced orchestra, the work is both both elegant and rich with thematic color…and, for the soloist, very difficult to perform. The opening stanza is an audition ace, as flutists across the world harness the dramatic statement to impress panels. The piece as a whole sustains an exhilarating pace, with two poignant respites that allow our soloist to catch her breath…just before hurling the audience into an electric finale. The following recording features Emmanuel Pahud (my flute hero) and the Tonhalle Orchester Zürich performing the first movement of the concerto. Enjoy!