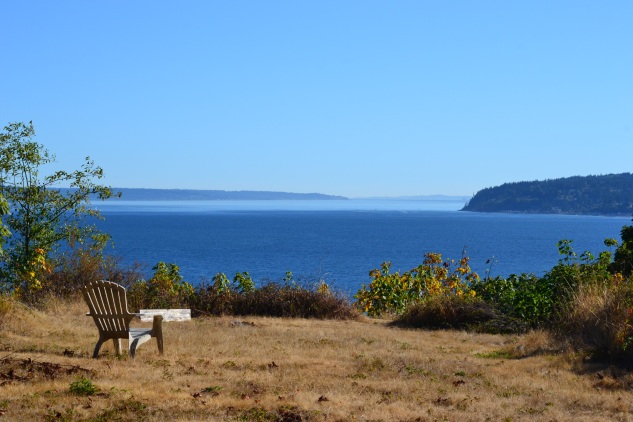 I have to say, the Pacific NW won me over this summer. Surrounded by mountainous vistas and cerulean waters, it’s a paradise for those who love the outdoors. Now that I’m back on the East Coast, I’ve been reminiscing about my travels over the last three months. Tom and I visited a lot of really cool places, and one of those getaways included a weekend stay on Hat Island. The above was the view just outside the house we stayed in – sipping hot coffee in hoodies and slippers while watching the sun rise – courtesy of some wonderful friends. It was a quick but memorable weekend, and we indulged in some fantastic dinners while there. Tom and I treated the group to a big Italian meal: a basic arugula salad and heaping plates of Sunday Gravy (basically extreme spaghetti and meatballs).

Hat Island is a very unique place. Housing more than 200 families (permanently or as a vacation stay), it is a private island that’s just over 1-mile in length and overrun with bunnies. Tom’s good high school friends’ have a property there, and they generously invited us for a two-day getaway from Seattle. One of the great things about cooking at a summer house is consistent access to natural light. As Serious Eats points out, “a shady spot on a sunny day is the holy grail of natural lighting conditions” (when it comes to food photography). I’m no professional, but photos with natural light versus those without are like night and day…pun intended! The below photo, of a basic arugula salad with fruits and goat cheese and walnuts, shows just that.

So, about that gravy: one of our favorite TV shows is The Sopranos. Many believe this series launched the genre of quality storytelling outside of the movie theater (read: paved the way for GoT). Whether you’ve seen the show or not, its cultural impact still resonates today. Those who watched it finally understand that spaghetti sauce should actually be called gravy…when done the Italian way. This recipe takes hours to make, and is sourced from The Sopranos Family Cookbook: “written” by Artie Bucco (the chef of the show’s Vesuvio restaurant). The book stays in character, voicing the opinions and anecdotes of our favorite cast members. Despite the tongue-in-cheek writing, the recipes are genuine, having been written by actual chef Michele Scicolone. The easy-to-follow instructions result in some fantastic dinners. 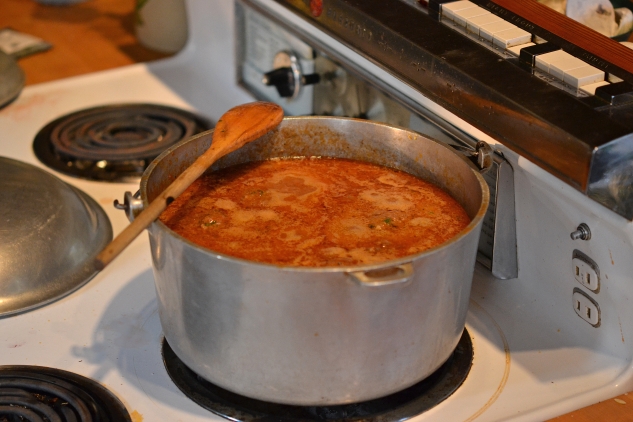 The recipe can be adjusted up or down to yield your desired serving size. I’d say my two key pieces of advice for this recipe are 1) don’t sacrifice on time – be prepared to invest an afternoon in making this – and 2) don’t go crazy with side dishes, since this is a filling main course. If you do make way too much food, however, the leftovers are still pretty great. We served ours with whole wheat spaghetti, but you can choose any noodle. Take some inspiration from The Sopranos’ Paulie: “Can I just get some macaroni and gravy?!” Click HERE to see the recipe for this mouthwatering classic.

Like I said, a small serving of this goes a long way – thanks to the rich and filling gravy. For the musical pairing, I was looking for two key qualities. The first being a piece that exudes depth in a “serving size” length, and the second being a musical excerpt that was featured on the show The Sopranos: in homage to the cookbook. Fortunately, there was an aria that fit the bill: “Chi il bel sogno di Doretta” from Giacomo Puccini’s opera La Rondine. The aria is short, but – like any great Puccini aria – takes your breath away with a few stanzas. Yet the work is a deviation from Puccini’s canon, as it is essentially an “operetta”: a compositional style more akin to musicals than classical opera. Puccini initially eschewed the form, claiming “An operetta is something I will never do.” Yet geopolitical circumstances (WWI) led to a loyalty contract which ultimately resulted in the premiere of La Rondine: which by the way is Italian for “the swallow.” As for The Sopranos, the aria appears twice in the series: once in the pilot episode, and then again in the finale of Season 5. In both instances, Tony Soprano (our protagonist) comes to understand his own mortality – and how trivial daily annoyances can be. My opera geek friends may see the irony in a (real life) soprano narrating a (fictional) Soprano’s brush with death…the following recording is the same that was used in the show, featuring the singer Luba Orgonasova. Enjoy!