Thanksgiving – a term that connotes joy and family to most, yet strikes fear into the hearts of every turkey in this country. And for good reason, considering Thanksgiving is the one holiday where we are willing to eat more of this particular meat than deemed humanly possible. Take my Thanksgiving, for instance. It was just Tom and me this year, and we still baked a monster of a bird (weighing in at 14 lbs) plus an absurdity of sides as though two people could conquer such a thing. One lost turkey, a neighborhood-wide power outage, 2 sticks of butter, and loads of Ziploc bags/Tupperware later – we did. I imagine that last sentence really confused (or intrigued) you, so here are the details of our Thanksgiving Feast: 2016 Edition. I will be featuring three recipes in this post:

Let’s start with the bird – I normally go nuts with brining, but this year we had a little hiccup known as Safeway. Our bird was accidentally sold to another client (or it ran off to Disney World to join its pardoned brethren) so our original plan to cook a 9-pound turkey was replaced with a plan to hastily find another one. Our search yielded a heavier bird, and, given its size, I simply salted the meat and refrigerated the bird in an uncovered roasting pan. The success of this simply trick guaranteed that I will never undertake a complicated brine again (I can almost hear my mom breathing a sigh of relief).

I also glazed this bird, but since we had limited in tools (aka no brush) our turkey took on a bit of a tiger appearance – and Tom will tell you I had a 10-minute stress session as to whether I should even blog about it. But it was love at first bite. The skin was perfectly crispy, the meat itself was ridiculously flavorful, and the glaze’s remnant made one of the most delicious gravies I had have ever created. So our tiger bird just happened to be one of the best turkeys I have ever made. I kind of credit the power outage and runaway Safeway turkey for this one, but also know to give the recipe credit where it is due. You can find my modified version at THIS LINK. 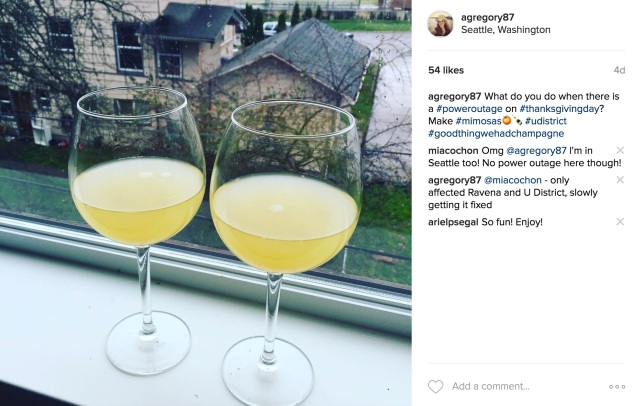 About that power outage: which is why our corn muffins were so delayed. The turkey was sitting out, coming to “room temperature”, and the power cut out. We were also watching Episode 8 of West World – my newest obsession – and it cut out on a terrible cliffhanger (I can hardly describe the angst that followed). So anyways, it is in moments like these that Twitter becomes extremely useful. After a few hours and a tweet to the nice fella manning the SEA City Light account, the power came back on and we were good to go. It was during this brief respite that Tom and I also enjoyed some mimosas (Instagram post above…I don’t have any other photos from the outage since it was super dark inside of the apartment).

So let’s talk about those brussels sprouts – they are fairly self-explanatory as the photo suggests. I said to Tom, “Let’s make these with bacon” and he heartily added “with blue cheese too!!” It was a healthy day. One of our secrets to great sprouts is roasting at high heat until crispy and cooked through. I can guarantee this will cure any aversion you have to the veggie, as roasting gives them a slightly nutty and almost sweet taste. But if you really want to kick it up a notch, follow our lead and toss them with blue cheese and bacon. You can find our recipe for these delicious veggies at THIS LINK.

And finally – the Vegetable Mash. This might sound basic (not to be confused with #basic) but it is far from it – thanks to the addition of roasted garlic: the holy grail of mashed anything. The recipe itself is quite simple: the sweet potatoes and carrots are roasted, then puréed with salt, pepper, butter, thyme and roasted garlic. You can find the recipe for this lovely side at THIS LINK. 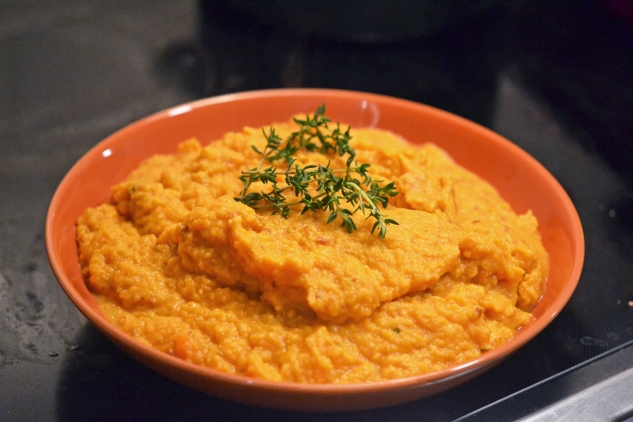 So I wrote this blog with a taste of humor quite intentionally, considering current events – the past two months have been…rough, to put it lightly. And so we turn to the things we know and love: food, family, and humor. But perhaps what we should be discussing more is history, and looking to the wisdom of its lessons. After all, Thanksgiving itself is a bit of a history lesson: and, while it is not the most civil one, it reminds us of a time that we came together. What makes America great is not its ships or our flag or financial prosperity – it is the people who color the threads of this country’s rich, cultural tapestry.

So for my musical pairing, I chose a piece that commemorates the beauty of America: Antonín Dvořák’s Symphony No. 9 in E Minor, Op. 95: “From the New World.” While this was written by an Austrian, the piece itself celebrates the history and roots of the American culture, with spirituals and themes peppered throughout. Dvořák wrote the symphony during his brief sojourn in New York, and it has since become one of the hallmarks of the orchestral repertoire. The piece was premiered in December of 1893 at Carnegie Hall. The below video features the New York Philharmonic performing the piece – enjoy!